As the grim realities of diminishing life and unfulfilled promise hit home, Josh (Ben Stiller) retreats into his young adulthood, or rather his young adulthood as appropriated, reimagined and repackaged by a real life, present day young adult. As Josh’s wife Cornelia (Nicole Kidman) observes – her reaction symptomatic of the film’s dialogue’s observational wit – “It’s like their apartment is filled with things we once threw out, but it looks so good the way they have it.” The “their” refers to Jamie (Adam Driver) and Darby (Amanda Seyfried), the young documentarian and his ice-cream making wife whose enthusiastic otherness awakens something dormant in Josh and – to a slightly lesser extent – Cornelia.

But is director Noah Baumbach’s thesis that some things are best left dormant lest they subsume us, throwing coasting but cosy lives into a terminal spiral of doubt and self-doubt? According to the borrowed passage from Henrik Ibsen’s The Master Builder (1892) that appears on the screen at the film’s start, maybe not. In it, one character implores the other to stop fearing young people and to let them in, to “open the door” to them. Though, as anyone who’s familiar with Ibsen’s text will know, the character being urged to open the door is also the one who ends up falling to his death just before the curtain comes down after him.

While We’re Young opens with Josh and Cornelia ineptly trying to console a baby that’s not theirs. They’re the last among their peer group without a child to use as the cornerstone of their existence. The questions seems to be: if they’re not parents, what are they? In the subsequent scene, the couple throw platitudes back and forth, each one aiming to convince themselves that they’re fine as they are. The reasons range from their friends’ newly sexless relationship to their ability to take a trip to Paris at short notice – though this ability is a muscle that hasn’t been flexed for some time.

The two couples’ paths first collide when Jamie and Darby attend one of Josh’s documentary film lectures. Josh is a documentarian himself, or at least he was. His current film – about American might, the military-industrial complex and global capitalism, and build around interviews with a Chomskyan intellectual – is in a state of perpetual production and has been for a decade. He cites his influences as being the Maysles Brothers, Frederick Wiseman and D. A. Pennebaker. His first job out of school was working with a fictional giant of documentary film and the father of his wife, Leslie Breitbart (Charles Grodin). The rupture at the heart of the father-in-law/son-in-law relationship is played to teeth-clenching awkwardness by Stiller and Grodin. 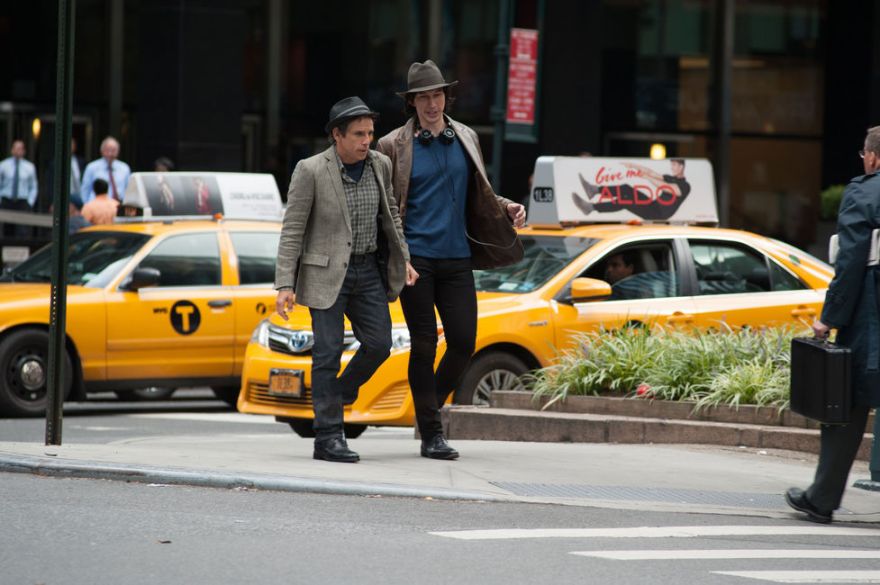 This is where the film is at its strongest, when it’s willing to allow details and history to be made real and tangible by the exchanges – verbal and non-verbal – between characters. Baumbach did this best with 2007’s Margot at the Wedding. In that film, characters collided and bounced off one another, each hit revealing something we didn’t know before. Or perhaps didn’t realise before; the naturalism granted the audience room to explore the characters and themes as the plot unfolded gradually. With the help of DP Sam Levy, the framing in While We’re Young is far more restrained than the jerky documentary realism of Margot at the Wedding. Every shot has been pondered over and the camera is always placed so as to make economical use of the space and remove the need for extra shots.

What’s most effective from a formal standpoint is the repeated use of montages. They’re used to highlight the unexpected contrast between the two couples and two generations. The technology montage skips between Josh and Cornelia doing such insular, technology-centric things as sitting in bed flicking through the Netflix viewing options while Jamie and Darby put on a VHS copy of Joe Dante’s The Howling (1981) and play board games. In another example, the montage is used to accelerate the process Josh goes through as he falls in love with Jamie and his hipster lifestyle. For a filmmaker with such a flair for dialogue, these wordless montages manage to convey Josh and Cornelia’s rejuvenation and the reasons for it better than any dialogue-led scenes ever could. The montages themselves function as microcosms of the high the couple get from being around Jamie and Darby because the end of the second montage also serves as the end of the incline and the beginning of the decline.

This was inevitable. Before long the fact that, as a friend is more than happy to point out, he’s an “old man with a hat” had to be confronted. The retro obsessions that seemed novel and quirky at first, quickly become annoyances when Josh detects the whiff of posturing bullshit coming from Jamie that most of the audience will have picked up on much sooner. The director’s equal opportunities satirising allows him to get away with this where other more conventional directors may have fell into an abyss of smug observations that are as well-worn as they are untrue. By making the new mother cult with its happy-clappy, maniacal singing meetings as fair game as the hipsters who have a pet chicken called Nico, it can use both youth and middle age to its comedic and dramatic advantage. And in doing so, it refuses to justify the thinking of any one character.

Baumbach’s need to hand a happy ending to his main characters leads to a climax that feels more conventional than the film deserves. The writer-director offers no real answers to the questions he poses, and those that are offered are directly at odds with the moral of the story. Josh the good, honest guy who believes in truth and integrity in art is a terrible filmmaker who’s lost his way. Unable to speak with his own voice, he relies on an amalgamation of other people’s, resulting in a 6 hour documentary that has taken 10 years to make and still isn’t complete. Jamie on the other hand lies and twists the facts, but at least he has a vision and, clearly, a career as a documentarian.

So, despite that, why do I still love While We’re Young? With the articulacy and wit we’ve come to expect from Noah Baumbach over the last decade, the film is both funny and affecting. No film has better probed the unsolvable problem of ageing and the effect this has on one’s judgements. But more than anything, the attempt to wrap a disquieting conclusion up in a neat comedic framework with a happy ending you always knew was coming is slyly satisfying.